A bearded Dragon shedding its skin can be a bit ornery to deal with. A beardie going through this process is understandably agitated as it probably feels as if it has loose clothing on it and can't get it off.

A bearded Dragon will usually try to rub it's loose skin somewhere on its environment, in attempts to rid itself of the dead skin. When going through this ordeal a Dragon might not enjoy being handled as often as he did before, so try to be extra patient and understanding when handling your bearded Dragon. 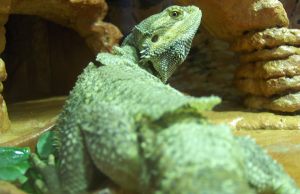 You'll know you're Dragon is starting a "shed" when he or she starts to look as if they have on a light gray sweater. Usually a bearded Dragon shedding its skin will do so in an uneven inconsistent manner. He might shed just his facial region over the course of four days, and then proceed to shed his limbs and/or tail -weeks in the future. What you should notice is the somewhat brighter, and oftentimes much brighter and more vibrant, colors that are produced as a result of your bearded Dragon revealing its new skin.

It's like getting a brand-new shiny bearded Dragon. When trying to encourage a healthy shed of your Dragon, general health tips apply. You need to have your beardie on a proper diet which includes the hard greens such as collard greens, kale and mustard greens (greens humans seem to rarely eat). In reality even though heads of lettuce are the most popular "green" that human beings eat, they are the least nutritious and actually qualify as something you want to avoid feeding your pet bearded Dragon.

Isn't that ironic, that human beings usually won't dare to feed their pets the awful food we feed ourselves? 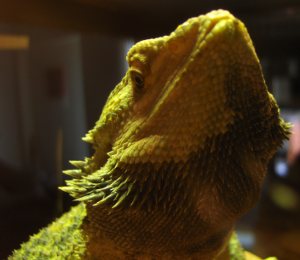 We need to learn from our pets sometimes... The diet a bearded dragon eats is quite superior to what the average human eats. -That's assuming the dragon's owner is taking good care of him or her! The hard greens and other various vegetables combined with the occasional protein of insects; with an essentially sugarless diet -would be almost ideal for most humans! Learn from your dragon... Eat a little bit of the hard greens, mentioned before, when you're feeding your dragon, -just don't deprive him too much. The other thing you want to make sure you're providing is the proper lighting conditions which produce the needed UVA and UVB light that simulate the sun's rays. I've found the Mercury vapor bulb to be the closest to simulating the rays of the sun. In addition to this the temperature -as in heat need to be at the proper temps for a Dragon to be able to digest its food.

You want to try to avoid the temptation to peel off the bearded dragons skin. This could potentially damage the dragons new skin, so the best advice is to just let nature take its course. If you have a bearded Dragon shedding and want to help your pet lizard, there are a few steps you can take to encourage the shedding process. One thing you should be doing on a regular basis is "misting" your Dragon at least four times a week. I feed my bearded Dragon insects in a separate Rubbermaid container, and when he's done eating I'll mist him with water -soaking his entire body. If you do this you want to make sure you completely dry him off before putting him back into his cage, not doing this can result in bacteria growth due to the moisture.

So with the above procedure you are already exposing a bearded dragon's skin to moisture thus encouraging a bearded Dragon to shed. Another thing you can do is to give your bearded Dragon a bath once a week especially during his shed. Allow him to soak in lukewarm water for 10 to 20 minutes, making sure you dry him off before putting him back into his cage. While he is in his bath you can gently rub his skin which should gradually loosen the old and dead skin allowing it to fall off more easily.

So take into consideration all aspects of health and care when dealing with a bearded Dragon shedding its skin.