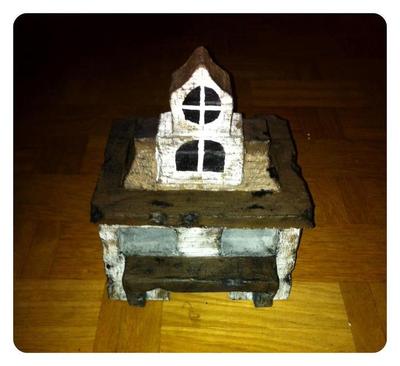 This is the story of the haunted house (garage) that I created for my son.

I first built a large model that he wanted to play with, and that's when I decided to build a smaller model, that would be his "garage". This small model is open in the back with two floors and a trapdoor inside.

When I bought all the accessories I did not find 10mm Styrofoam that I wanted to use, and the thinnest I found was 30mm. I had to cut almost all the pieces in half.

I've used a glue suitable for styrofoam and bought the wrong grout with sand in it, but it has worked pretty well. For this project I used three coats of grout before it was time for priming. Painted the entire project in a light gray acrylic paint as a primer before I painted all the details.

When I painted the ceiling, I had prepared too little color, and when I repainted it, it was totally the wrong color. Instead of brown it became a more moss green color that I used. Did the color a little brighter for some sections of the roof. I painted the sides of the house in white and drew lines, which then became like bricks and not the wooden planks that I had in mind.

Decided not to make a porch to the small model, looks more like a balcony with no railings, supported by "concrete pillars". Also decided not to cover some windows with wooden planks because my meddling son would surely winkle them off.


After all the mistakes it was time to dry brush. Used black and light green color and just let the brush glide over everything and nothing. It's just lack of imagination that sets its limits.

Thanks Lizard Landscapes for all the inspiration.

Join in and write your own page! It's easy to do. How? Simply click here to return to Haunted house model.